Everton’s transfer windows can either go one or two ways, filled with positivity like the 13/14 season when Lukaku, Barry and McCarthy came in; or completely baffling like 17/18 when we spent over £100m on a set of players that didn’t fit into a team.

This season looks much more optimistic with Richarlison, Digne and Bernard all making a significant difference so far. As of this point though, we are yet to see much of our two new additions due to injuries, both from Barcelona, both widely criticised by their supporters. One being Yerry Mina who signed permanently, the other Andre Gomes who signed on-loan and a player who has much, much more to prove. With his contract expiring at the end of this season, the Portuguese-man must show his £33m deal to Barca was worth it and not to go down as surplus to requirements.

Having made his debut at the weekend (which we will get on too), the much-awaited arrival of Andre Gomes has been fuelled by Everton having a few problems in their midfield, both defensively and offensively. Most match reports, blogs or analysis over the past three years + will point to being too slow, not enough effort, not up to what’s required, I’d suggest having no sustained maestro. Barry clever workmanlike, Fellaini dynamic and trouble in the final third, but I’d say we’ve had no one pulling the strings, since the days of Mikel Arteta.

Andre comes with a big reputation, a graduate from Benfica’s world-leading academy, winning domestic titles in two different countries and most impressively, a European Championship medal to his name. What can he bring to Everton’s midfield? Can his presence elevate The Toffees higher up the table? Here is why he needs too…

The conundrum in midfield and why it needs to be sorted

You could recreate the Bayeux Tapestry with the number of issues Everton have had in the last few years, but one stands out more than ever… the lack of a progressive passer in midfield. There’s a lack of players that break any lines and split the opposition team, which is a big problem when you think about it. Gareth Barry was the last playmaker who could pick passes from deep.

As I mentioned from the Palace preview, there are far too many backwards/sideways passing from both Tom Davies and Idrissa Gueye. Out of the two, Davies is more capable of playing it forward (i.e. pass to set-up Calvert-Lewin v Arsenal) but from deep, Everton struggle to create anything major. Fortunately, Lucas Digne’s work on the left is a route around, feeding our attackers consistently and attempts much more difficult passes (and successfully as well).

If you have a player passing from the middle as well as Digne on the left, not only do you have more options when the game gets tougher but you also create much more chances as a whole. If Gomes is this sort of player, you’ll see a gigantic change in the quantity and quality in attack.

So, we’ve established why we need a change in our midfield, but what will happen with Andre Gomes in the team? Using some research ( Wyscout’s on a free trial), you can view stats over the last three seasons (not including the current) and compared multiple statistics between Andre Gomes, Idrissa Gueye and Tom Davies – our most likely starters in midfield. I then had my first experience of using Tableau and put the stats into a graph, for those reading who have used it before, feel free to send over any tips and tricks.

Starting off with our most important category. Passing. Gomes has tallied around 50 passes per game, Gueye a little more on 52 and Davies a lot less on 41. On average, the data suggests that Andre Gomes is just as/if not more capable of back passes than both Idrissa Gueye and Tom Davies. Against high-pressing teams and clubs that overload their midfield, you could see Gomes struggle.

Furthermore, Gueye has shown that not only does he produce more forward passes but also attempts more passes towards the final third of the pitch also. It’s worth pointing out that Gomes is slightly more accurate in forward passing than Gueye and Davies (Gomes – 81%, Gueye – 78%, Davies – 72%). In terms of passes into the penalty area and through passing, Gomes attempts more than both our midfielders.

Marco Silva looks set to choose the 4231 as his go-to formation this campaign, in that you need a holding midfielder and a deep-lying playmaker to create some attacking flow. Gomes is a more productive midfielder than Tom Davies, at least from a passing perspective, but Idrissa Gueye’s numbers have surprised me, the fact he’s keeping up close to him isn’t the greatest of signs. 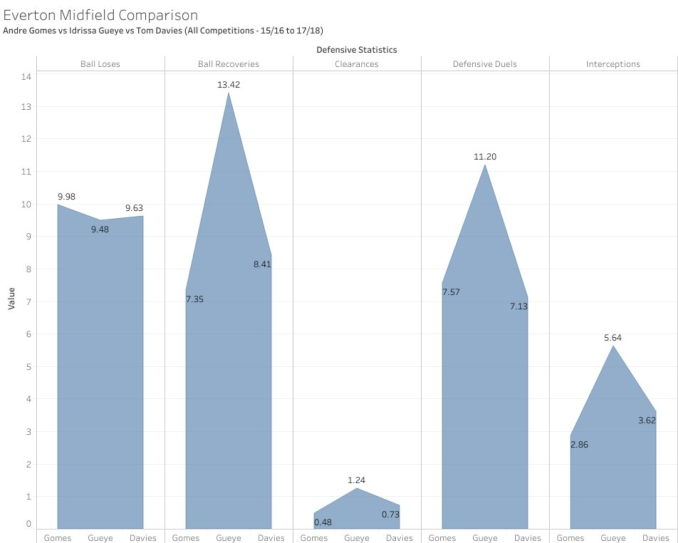 This shows that Gomes and Davies are fairly similar in terms of making ball recoveries and challenging in defensive duels (including tackles). Gueye’s importance is shown, but Everton aren’t really looking for somebody else to make tackle after tackle in midfield; the Senegalese’s only problem in defence is that he leaves so much space behind him when he drastically presses forward, leaving 2 v 1’s with Davies in midfield.

In attack, Gomes shows he can offer something different to what Gueye and Davies can, making runs from deep. 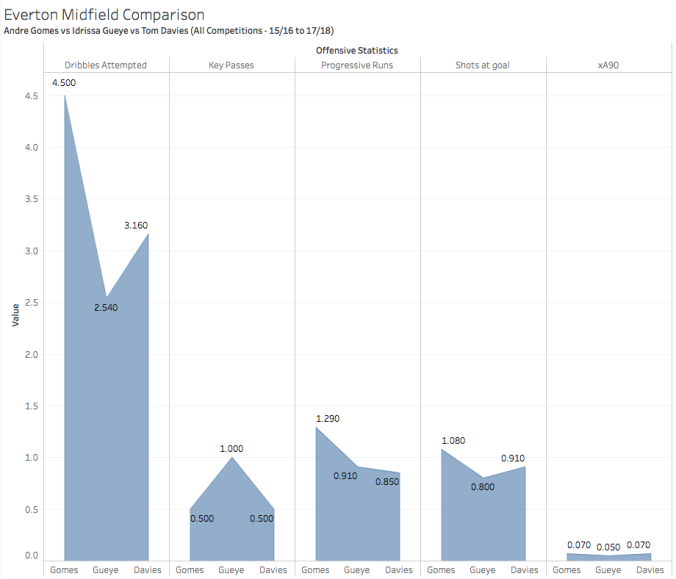 Gomes has attempted a lot more take-ons than both Gueye and Davies over the past three seasons. Showing that he makes these sort of runs are really important as he can carry the ball forward from a defensive situation into an attacking one. He can quite easily become another attacking option for us.

Based off these statistics, Andre Gomes can be seen to offer Everton more options in the centre of midfield, but in terms of distributing the ball, whether he is going to be the significant difference we need is up for debate.

A new and un-talked subject has come into play in terms of Gomes’ performances at Barcelona. Back in March, Gomes spoke to Panenka magazine about his struggles of dealing with criticism from multiple news outlets and Barcelona fans themselves. Gomes stats last season speak for themselves.

His record from last season isn’t that pretty but it does show some promise, a high successful dribble per 90, a healthy number of accurate passes and also a fairly decent xG. He has got time to settle and I expect he’ll tally up better numbers than these, but he’s joined a club that fans have over-protected some players and harshly criticised others. My message here is, give the lad time.

His debut vs Crystal Palace

The game against The Eagles was a close, cagey, stop-start affair with not much flow to the game until the second-half had begun. Palace defended fairly deeply, not letting much few, in attack, they targeted Coleman’s flank, Zaha shifting over from upfront, van Aanholt making a few runs forward and this created a few issues during the game. Gomes was next to Gueye in a 4231 and after the game, a lot of Everton fans were raving about his distribution of the ball.

Here are a couple of the passes I picked out that led to a decent chance or at least showed some progression in our play.

Passes like this (especially the one through to Walcott), are very important in terms of the quality of chances Everton create when they come off. To see a midfielder attempt passes like this is a positive sign. Overall Gomes completed 55 of 60 attempted, 22 going forward, 16 successful passes in the attacking third of the pitch; which only Lucas Digne topped with 21 passes.

In terms of passing combinations, Gomes fed Digne the most with 12 passes, Coleman the second highest on 10 passes. Feeding our attacking players was a different story, no passes at all to Richarlison, whilst Sigurdsson, Bernard and Walcott all received 4 passes from the Portuguese man. It’s only his first game and Richarlson will be overmarked (2+players constantly closing him down).

To conclude, he’s a more dynamic and ambitious passer than Idrissa Gueye, but the room for improvement is there and when his confidence builds he can be an important cog in the team. A much better alternative in my opinion than the similarity of Schneiderlin and Gueye as our midfielders.

There’s no defiant answer to whether he’s going to solve Everton’s midfield issues after one start in the team, nor can we really conclude over the stats from the past three seasons. During his time at Valencia, he was easily regarded as one of the most exciting young players in La Liga and was being linked to multiple elite clubs in Europe.

If he has that sort of confidence and effect on the Everton team, then we’ve made on hell of a coup; but there is always a chance it could have the reverse effect. Gomes suits Silva’s plans a lot more than other midfielders in the squad, there’s potential he can become one of our best midfielders in the Premier League era… but give him time to adjust.