Goodison Park had never seen an Everton team look so outstripped. We all knew the class of Man City prior to kick-off, a team who had played 30 times in the Premier League and only losing once in that period; however, the way Everton plummeted in 4 minutes was as laughable as it was painful. Saturday’s visitors weren’t just a level above us, they looked like the clone footballers out of the Nike 2014 World Cup commercial in that first-half. As well as this, Allardyce’s comments after the match certainly haunted every Evertonian as they went to bed that evening; saying that “we won the second-half” is an indicator of just how far our dignity and viewpoint of the club has dropped. Going from a feared club with a fortress of a home ground and a team honoured to wear the shirt; to a quiet stadium, a disjointed team and becoming a team that everyone fancies a chance within the Premier League.

Hopefully, the gravy-drinker’s time at the club is ticking, summer is on the horizon and the chance to restore hope and ambition is inbound. I don’t think Sam Allardyce is going to be booted before the end of the season, however, it absolutely doesn’t mean he shouldn’t have a plan for the upcoming weeks. The Merseyside derby is just a few days away, as well as places still up for grabs; with even the possible chance of Europe if Burnley or Leicester are to slip up. Everton is in a desperate need of a structure, so here is my proposal for one.

1. The Formation to Play

I’ve been looking at formations throughout the course of the last five seasons and I believe it is the route of a lot of Everton’s many problems. In the research, I have made two conclusions. The first is once you find a winning formation, you must stick to it; Chelsea changed their formation from 4 at the back to 3 around September 2016, which enabled them to win the league by 7 points. The Man City team of this season have made just two changes to their starting formation throughout the campaign.

My second conclusion is that the teams that chop and change the most tend to struggle more than anybody. The three clubs that changed their formation the most last campaign where all relegated (Hull, Middlesbrough and Sunderland – all on 10), whilst this season West Brom and Stoke have still made a vast amount of changes to their starting formations (8 for West Brom, 7 for Stoke).

Meanwhile, Everton have made the most amount of changes to their formation this season than anyone else – hitting double figures. In my opinion, I believe this was a big reason why Koeman’s team disintegrated and completely failed to kick on during the start of the season. Koeman made 8 changes in total to his starting formation last season, although versatility can work for some (just look at Tottenham), it has sent us backwards when you consider just how much the Everton team needed stability post-Martinez era.

Allardyce has set us up in a 4231 formation, just like the last few bosses in the dugout prior to him. Overall, this has created a negative reaction to the team and it takes a lot of our threat away because of it. In this formation, we average 1.1 goals per game, whilst conceding 1.5 goals. In comparison to other systems we use regularly, the 433 concedes the same amount, but our average goals scored increase to 1.7 goals. This is a staggering difference when you consider the amount of shots Everton produce.

Another formation that has gone completely out of use for no reason about is a 4141. We have used the 4141, 3 times – keeping clean sheets in all 3 (including Chelsea) and scoring 4 against West Ham and 2 against Huddersfield. Yes, these were all games at Goodison, however, a system that looked like it could rebuild us was instantly scraped when we faced Liverpool the following week.

Formations aren’t everything in football, but they are the first part of the plan and seeing Sam Allardyce rotating consistently and changing our formation convinces me of the uncertainty that the players have in the plan to begin with? With our season already dead in the water, I believe using a 4141/433 would follow in something to end the campaign on a good note (as awful as it has been)

Defensively, most of our positions pick themselves from the players available (doesn’t mean the squad doesn’t need an overhaul). The fact Mason Holgate was booted out of the team after proving he’s our best defender is the most criminal decision Sam Allardyce has made in his half-year in charge. In his 15 appearances this season, we have lost just 4 times and it’s no coincidence, we defend better when he is on the team.

For other players, however, it is the first time in my lifetime that there have been so many people question whether the players can be bothered to play has risen. Even in Martinez’s last season, I do believe the players wanted to be there. A lot of the players have developed an “I can’t be arsed” mentality and I’m not just talking about Williams and Schneiderlin; who appear the first to get it in the neck. With the season gone, I’d happily stick on players that want to be on there and will give it 100%.

When facing Man City, we showed just how poor we were with two central midfielders, especially when they either looked slow or invisible. Going forward, we have become over-reliant on Rooney’s passing, when our opponents don’t close tight on him, others around him too as well. So, who do you put around him?

Tom Davies would be my first choice. Not only does he provide a good amount of defensive contribution, but he is also a decent passer. The home game versus Brighton demonstrated his capabilities, he was a key link between defence and attack and the support of Coleman, Rooney and Walcott helped him massively.

In an attack-minded system, Davies can be a crucial player in the middle of the park when he has the right support around him. Having him playing a more box-to-box role would enable Rooney the freedom to go more offensive.

With Idrissa Gueye potentially missing the derby, I’d 100% consider Beni Baningme replacing him. After playing a massive part in Everton’s Premier League 2 title-winning squad, he thoroughly deserved to make his debut and has impressed us whenever he is on the pitch. He is both energetic and a brilliant tackler, something our midfield has missed, even when Gueye is on the field.

Playing two teenagers in our midfield isn’t putting them in danger or ruining their confidence, I’d have them on the team because they benefit Everton more than any other option in midfield.

In terms of going forward, we have missed a player who’s capable of completing take-ons. Only Burnley have completed dribbles per game less than we have (6.9 Everton, 5.8 Burnley) in the Premier League. Loaning Ademola Lookman out was notably stupid, proving that he can make an impact, especially in the last derby game. Nikola Vlasic has remained in the squad but has only featured twice in 2018.

Bolasie has not recovered his pre-injury form throughout the season and not just on 1v1 situations, so why not give Vlasic a go on the left? He’s fast, makes forward passes and can be an important link to Cenk Tosun/Calvert-Lewin in the upcoming weeks. 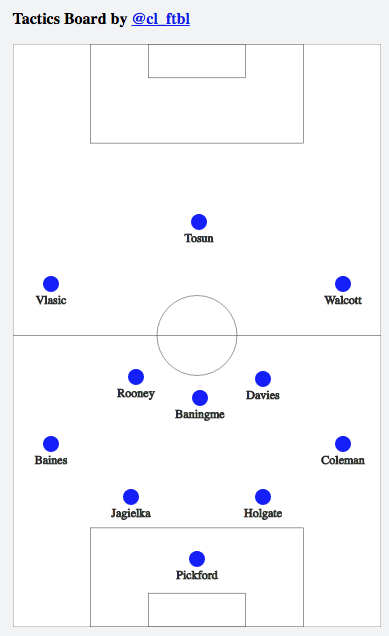 This is how I’d set-up the current Everton team.

Watching Everton play long-balls is the most useless 90 minutes you will ever watch. Not only do we attempt 73 of them per game but just 18% of them come to effect. Yes, the probability of playing a long ball is much more dangerous to play a short one, but 18%! It hasn’t worked whatsoever, and clearly, with clever teams like Spurs it’s a very quick turn over even with the work rates of Tosun and Calvert-Lewin upfront.

I always believed that dictating the game is the best way to play and that’s been the case for Everton under the last 5 managers. Possession equals chances being created and when you have Rooney on the ball, this can come to great effect.

We still miss a creative player in our midfield, a problem for a long time, but playing more possession-based football will benefit the team and the fans of the club who have been crying out for something different.

When playing teams like Swansea, West Ham, Newcastle and Southampton in upcoming weeks, Everton must keep the ball and be patient with it. We can beat every one of the teams in our last 5 games of the season; the Merseyside derby being a bit more questionable. With a positive way of playing, it will help the team going into next season. Yes, this is the worst campaign in living memory, but the fans are deflated and fed up of being rolled over in the first 5 minutes. Give them something to be looking forward to going into next season.

The summer is a very unpredictable time in football, with a world-cup looming who knows what decisions Everton’s spineless board will be making. Rumours will be flying about so we could be under new management or any glimmer of ambition can be sucked up by a black hole and times like this will continue. At this stage, we just want an Everton team that can fight.