Was about time Everton treated us with an actual good display and a worthy game we can talk about. Brighton had come to Goodison in good form, beating Arsenal last weekend, winning their last 3 games and unbeaten since the end of January; a tough test for a poor Everton side. Nevertheless, The Toffees started off very well and looked on top for 95% of the game. For the first time all season, we looked like we wanted to keep the ball and without Gueye/Schneiderlin, we were capable of keeping the ball flowing much more than we usually do.

Ok, we weren’t Barcelona, but seeing The Toffees keeping the ball and aiming forward was something we haven’t seen in recent times. There was a huge groan online over the midfielder partnership of Rooney and Davies being announced. For me, it enabled us to go for a more controlled approach. Davies doesn’t have much of the ball anyway, but recently when he does he has the tendency to pass the ball backward. You need midfielders like that so more space can be created, and for a 19-year-old in a woeful side, he had a good game. As for Rooney, he was our “regista” in midfield; positioned dead centre of the pitch.

With him positioned there, Rooney can feed the ball towards both of our flanks. I’ve criticised Rooney a lot this season, but without him in our midfield, it usually involves in Everton crumbling to ashes. He not only played a big part in our attacking play but helped recycle the ball. 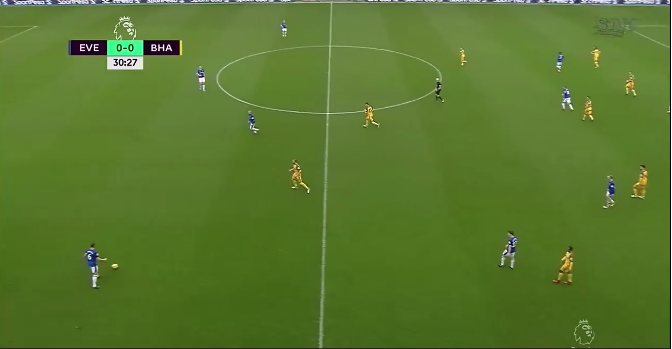 As Coleman and Baines pressed up the pitch, Rooney would drop deeper, sometimes placed in-between the two centre-backs. This created space around the centre of the pitch. Davies positioned himself close to Coleman and Walcott, which created countless amounts of overlaps on the right side. Sigurdsson was close to Tosun providing him support.

Most of Rooney’s passes in the first half were attempted just in the middle of the pitch (roughly around where he is positioned in the picture). You can see a lot more options than what you usually see an Everton player would have.

As you may expect, most of Everton’s play was in the channels; makes sense when you consider this is where our creative players are. One of The Toffees biggest problems talked about by Evertonians is the severe lack of balance, but it looks like we showcased this yesterday. Equal play through both flanks, both Coleman and Baines overlapping, it was a great sight to see.

Not to turn into Scrooge, but I witnessed two problems with us yesterday. One was take-ons. No Everton player completed more than 2 individual take-ons all game, and we only completed 2 out of the entire team in the first half. Considering that this was through our most dominant stage of the game, it stopped us from being much more dangerous which leads on to my second problem. We still lack a creative number 10.

Sigurdsson was not involved in any open-field opportunities being created nor did he complete any passes that made any threat. I only remember him making one half-decent pass, finding Walcott on a counter just before Theo had to go off with cramp. In games when we control like that, on-form Sigurdsson would’ve been much more involved than he was.

Prior to Brighton, Everton hadn’t kept a single clean sheet in 2018. It was a breath of fresh air to see us in some sort of structure. We allowed Brighton to have possession, but Everton where extremely deep so Brighton couldn’t work between the lines. Keeping Pascal Gross silent was clearly the main objective, Rooney sitting deepest whilst Davies and Sigurdsson provided support to the flanks.

Only one player provided a huge amount of pressing on their backline, that was Cenk Tosun. With him pressing behind, it created mistakes when Brighton had possession of the ball. When the ball was past our midfield, we flooded the ball carrier as fast as possible.

This structure gave Brighton barely any of the ball; Matt Ryan in goal attempted the most passes (18) in the first half, and their main attacking option – Pascal Gross – completed just 9 in the first 45!

After months of expecting to concede every match, we showed strength in numbers and looked like there was a plan in terms of defending, not just sitting back. Yes, Brighton isn’t Man City, but we are in desperate need of organisation in defence. Tosun ran until the sun went down, Jagielka and Keane weren’t threatened all game and we looked very strong without Idrissa Gueye.

We aren’t going down, we knew that before yesterday’s game, but the manner we played was the most positive we have been in a while. Opinions haven’t changed on Sam Allardyce, but we need to decide what the plan is for the future. Hopefully, Moshiri is organised and has an operation in place for the summer. A great result, but an overhaul still in desperate need on and off the pitch.